Zonta International, its districts, and its clubs express themselves about and become involved in issues which aim to:

These aims align with:

Zonta Says NO to Domestic Violence Against Women 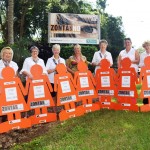 Since 2015 Club across the District have actively participated in the world-wide  Zonta Says NO to Violence Against Women campaign which peaks on 25 November (the UN Day for the Elimination of Violence Against Women) and runs through to 10 December (the UN Day for Human Rights).  During these specific 16 Days of Activism Clubs take action in their local areas with activities to raise the awareness of and impact of domestic violence on women and families.  Activities vary from Club to Club with many Club locating orange silhouettes of women in prominent locations and carrying information on the various forms of domestic violence plus information on where assistance can be sought by a woman (or a man) experiencing domestic and family violence. 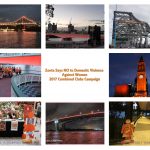 orange for all or part of the 16 Days of Activism. Orange is the colour used as it is a bright and optimistic colour and represents a future free from violence against women and girls as is consistent with the UN Secretary-General’s campaign which has proclaimed the 25th of each month as “Orange Day” to raise awareness and take action against violence against women and girls.

For more information on the Zonta Says NO to Violence Against Women Click here.

Letter to Minister Payne and others Jan 2020

District 22 submitted a detailed submission to this Taskforce.  Refer to the Attachments below for full details of our Submission

Appendix 1 Letter to Minister for Police

Appendix 2 Letter to the Premier of Queensland

Our District, on behalf of all Australian Zontians, sent an extensive submission to the Government on the Beijing Platform for Action: Beijing +20 Review.  Our submission was sent to the Prime Minister, the Honourable Tony Abbott, the Leader of the Opposition, the Honourable Bill Shorten and all relevant Ministers and Shadow Ministers.

A copy of our submission and attachments is below.

Letter to the Prime Minister the Hon Tony Abbott

Letter to the Leader of the Opposition the Hon Bill Shorten

Using the provisions of Article XIII Section 10 (b) of our by-laws which enables the Board to make decisions on behalf of the District between Conferences, the District Board felt it was important that Zonta’s views on these matters be brought to the attention of the Premier before the budget session of the Queensland Parliament (4 to 7 June 2013).

The letter below has been forwarded to the Premier of Queensland and to the relevant Ministers and other Queensland parliamentarians whose positions are listed at the end of the letter.

Clubs in District 22 should refer to the Advocacy Committee page in Members Resources for the process to be followed in progressing their advocacy initiatives.

Whilst our 2019 District Conference was only a couple of months ago our District Governor-elect Bridget Mather is already planning for our 2021 District 22 Conference in Mackay.  Dates and information on what will no doubt be another great Conference will be posted as they are announced so watch this space.